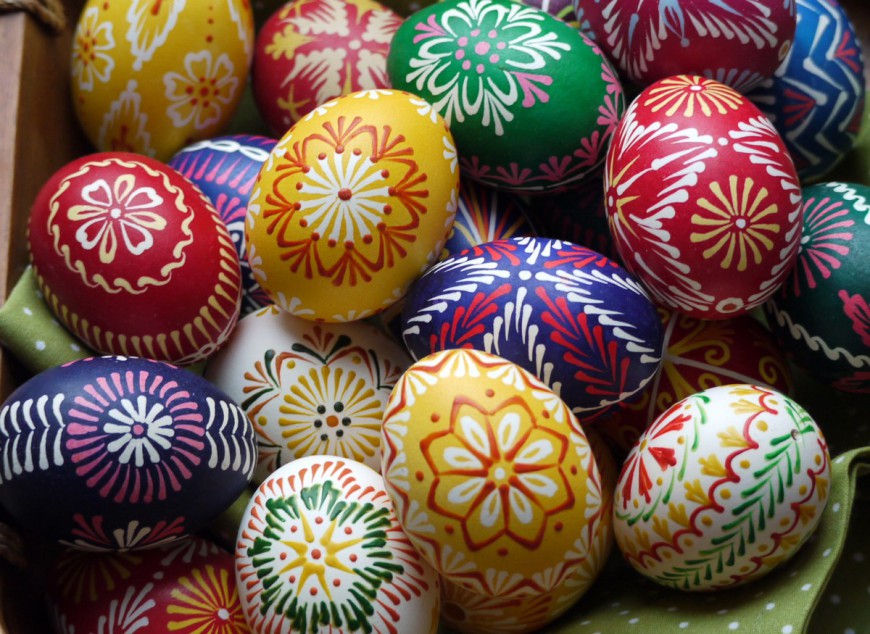 People were always fascinated by eggs – their modern and perfect form symbolizes renewal and continuity of life. They were a magic piece and even in the pre-Christian era they were decorated in order to strengthen their magical powers. Also in Slovakia, there is a great number of preserved traditional techniques of Easter egg decoration.

Batik is the most popular technique in Slovakia. It is common also in many other countries, the difference is in ornaments and colours. Patterns are drawn by a pin (originally a thorn, piece of wood or a match) which is stuck into a wooden stick or more simply into the other end of a pencil. You dip the pin into warmed, liquid wax and make dots or drops on an egg. By prolonging the dot quickly you get a drop. How many dots and drops you want to have on an egg, so many times you have to dip the pin into the wax, it means up to 280 – 400 times! I know what I am talking about because all of the eggs on the picture below (except the biggest one) are made by myself. 🙂 You have to work quickly because the wax also dries very fast. After you draw the patterns you dip the egg into a dye solution. If the dye dries another layer of wax is applied on the latest colour coating to prevent areas under the wax from being coloured. This procedure is repeated several times, starting with lighter and finishing with darker colours. At the end the wax is removed by heating the egg above a flame. In some areas in Slovakia the ornaments were applied not with a pin but with a special tool with a small copper tube. Because it is hollow you get more wax for drawing so you can draw a whole long line. The patterns are geometric composed from lines and waves. This is a very similar technique to the batik. It is very popular and actually today most of the Easter eggs in Slovakia are made with this technique. The principle is the same like the batik but you use wax crayons. The wax is not removed so the decoration is in relief. It is also an easier technique because you can correct mistakes. The false line or dot is removed by a knife. This is not possible using just the batik. If you make a false dot with the wax, a stain will remain there and you cannot get it coloured anymore. And again on the picture some eggs I decorated. Etching is a fairly rare technique today. It is based on the chemical procedure of revealing the original colour of the egg shell on a coloured egg. The traditional etching agents used were vinegar or juice from sauerkraut but later these were replaced with nitric acid or hydrochloric acid. Using natural etching agents you get soft and fluent lines, with the chemical substances the patterns have better contrast and are harder. Etching agent is applied with a quill-pen, pen, painting brush, piece of wood or match. Eggs made by etching are always single-coloured. In using this technique you really need a lot of precision and patience. Ornamental patterns composed of tiny sticks are scratched out with a point of knife, razor, file, needle or with an awl. The eggs are usually painted red, blue, green, violet or black. Because it takes so much time to scratch out all the ornaments, at present the electric grind machine is used. The ornamental decoration on these eggs is very rich: you can find different stylized and naturalized leaves, buds, flowers or birds. There are also short wishes, inscriptions describing the private feelings of young people, their mutual relations, desires, feelings of happiness… For this technique you mostly use non coloured eggs. Different materials are pasted on such eggs: rushes, barley or oat straws, wool or yarn.

In this picture you can see eggs which are pasted with rush. It is a pulp of a special kind of swamp grass. First you have to collect green grass, then you have to open the stalks with your nail or with a knife to take out the pulp and leave it to dry. Some eggs are pasted with the pulp in its natural form but you can dye the pulp as well. Ornamental patterns are composed of spirals, flowers, very tiny pieces, birds and hearts. To the traditional techniques belongs pasting with wool, later embroidery yarn was used. Typical is the combination of two threads, one of them is usually white. Decoration is composed from three components: circles, waves and lines. From the waves you can create a flower, leaf, branch or strips. Pasting with straw is also a very popular technique. You can use barley or oat straws. First you have to clean the stalks, cut them in shorter pieces and flatten them. Afterwards you cut small stripes, rectangles, triangles and circles from the stalks and sticking them on the egg you create the whole composition. This is the only technique which has its origin in Slovakia. It was common in the past in the regions of North and North-West Slovakia. There were men wandering from one village to another repairing old pots with wire. In their free time they decorated other objects with wire: vases, mugs and also eggs. For this way of decorating you can use natural or coloured eggs and a copper or bee-keeper’s wire. Neither a very thin wire is suitable because it behaves like a thread, nor a thick one because the netting becomes like an armour. For a simple pattern you need about 4 meters of wire! There are three main possibilities how to knit the wire: you create scales, spirals or chains. This technique is very rare. Actually, most of the eggs decorated this way you can only find in museums. Decorators of these eggs were blacksmiths or apprentices who wanted to demonstrate their skill and invention. They fixed small metal pieces – which were related to their craft such as small horseshoes, hammers, tongs and spurs – with small nails on eggs. This technique is modern, very popular and very common. It is also called technique of the Madeira-lace because the eggs look like a kind of white lace with small holes. The eggs remain mostly uncoloured. The small holes are made mechanically with a small drill. The work is very difficult. As an egg-decorator once told me: “I am very happy if only one of three eggs breaks but usually two of them break… And of course at the last hole…” All the ornaments are then made with wax, again with a pin. Finally I would like to quote some words from the Slovak author Boris Filan: “Next time you go to the refrigerator to find what you need open the Bakelite shelf on the right side up as well. The eggs are sitting there in their small pits like parachutists patiently waiting until we need them. Take one egg in your hand, savour its form, smoothness and cleanliness. Remember that you are holding the germ of the whole universe. That yellow heart inside the egg, it is a small piece of the fire of the Sun… “