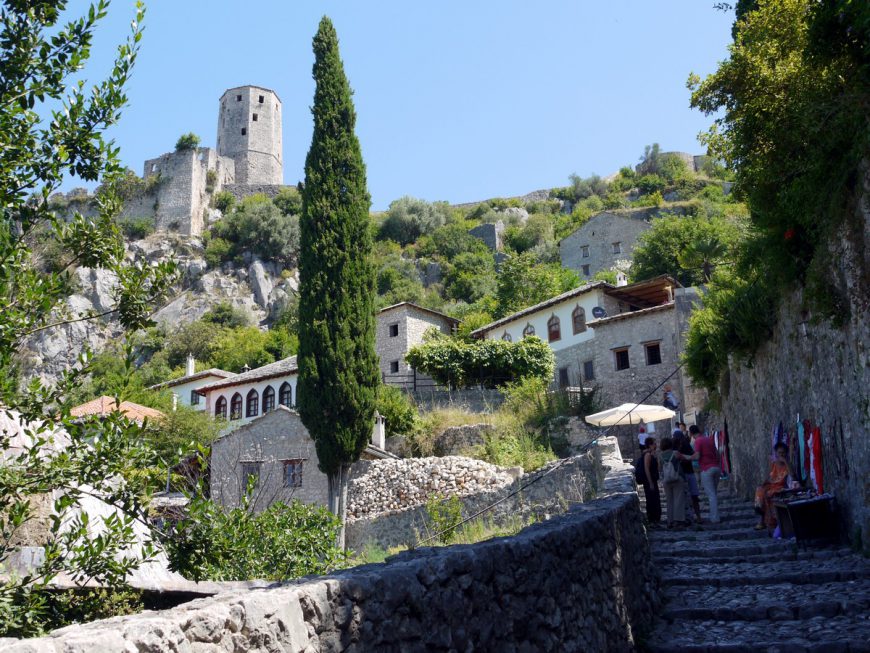 Most of the tourists leave their Adriatic beaches for one day and make an one-day-trip to Mostar. Although Mostar, considered the capital of Herzegovina, is really an unique town, there are also other places in Herzegovina which are worth visiting. Distances are not great and roads are good. There are small towns with stone houses, fertile fields, vast fields of sunflowers, tobacco plantations, vineyards… The road often lines the Neretva river with its emerald colour which opens beautiful sceneries in front of you or below you. Only if you travel through the land you will understand how varied this country is. Not only its landscape but also its inhabitants. There are so many different ethnic groups, religions and nations in this small territory. Therefore you will not be surprised if you suddenly see some cords with Croatian flags with the red and white chequered pattern hanging above the road. Or traffic signs written both in Latin and Cyrillic… And if one of the signs is scored out or sprayed on, this tells also something…

Blagaj is a small town, only 12 km to the south of Mostar. I stayed here so I could walk to its most important sights. It was a very pleasant early-evening walk when the heat of the summer day was subsiding. We passed a mosque (Careva džamija) from the 17th century and a small Muslim cemetery with typical narrow gravestones called nishani. There were also some typical stone houses which show the Ottoman housing culture. Pomegranates and citrus fruits were ripening on trees in the gardens. We crossed the river Buna through the 5-arched stone Karadjoz-Beg Bridge. These surroundings used to be a popular place to spend weekends for citizens of Mostar even in Yugoslavia-era. Today you can see cars parked along the road mostly from Turkey, but also Polnish, Czech and Hungarian cars among them. Tilting our heads back we could see the ruins of the fortress Stjepan grad on the hill Hum.

Foreign and local visitors were sitting in restaurants on the river bank, maybe they were enjoying the pleasant shadow and fresh trouts fished out of the river. Actually, the end of our walk was the beginning because we finally came to the source of the Buna river. The river is flowing out of a cave under a huge rock, hundreds of different birds were flying down to it. Mostly pigeons but it is not rare to see an eagle as well. According to a legend a dragon lived in the cave. Every year a young girl had to be sacrificed for him. When the dragon wanted the beautiful girl with whom the prince had fallen in love, the brave prince killed the beast. Well, I am not sure. There was something hanging from the cave ceiling which looked like a tail tip. It was even moving…

We entered the dervish monastery (Derviška Tekija) on the right bank of the river, stuck to the rock base. It was built at the site of an earlier Bogomil sanctuary at the end of the 15th and beginning of the 16th century in the so-called Turkish Baroque style. Followers of Sufism lived here and performed their religious rites. The house had luxurious facilities for those times. There were a mill, Turkish bath and flooring heating. It is a museum today. Before you enter the house you have to take your shoes off and women are given scarfs and swaddling skirts to cover their heads, knees and ankles. Men are also given skirts if they have shorts on. Počitelj is a picturesque small town on the left bank of the Neretva river, 30 km to the south of Mostar, with a fortress built by Bosnian king Tvrtko I. in 1383 on the steep karst rock which you will see from the road already. The maritime Republic of Ragusa (Dubrovnik) helped to build it, they sent building materials by ships down the Neretva river, paid part of the costs and sent their building expert Paskoje Miličević. For eight years, Ottoman attacks had been fought back from this place, but in 1471, following a brief siege, the town was conquered by the Ottomans. The site had a very good strategic position which enabled them to control the whole region. Therefore they fortified the walls, built one more tower and put 500 soldiers here. Also the Venetians conquered the town for five years but after that it was again in Ottomans’ hands. As a result of the fall of the Ottoman Empire the town lost its strategic importance.

Počitelj started to develop again not until the sixties when artisans and architects from the entire former Yugoslavia gathered here to assist in the preservation of the original urban architectural ensemble, so that the town remained in its original form to present day. This was the longest operating artist colony in Southeast Europe.

To the most popular sights today belong the Šišman Ibrahim-Paša-Mosque, residential houses, a Turkish bath, the tower Sahat-Kula (without the bell because it was molten for ammunition by Austrians in 1917) and an Islamic school – madrasa. The entire historic urban site and the surrounding area suffered extensive damage during the 1992-1996 Bosnian war. Croatian forces dragged Muslim inhabitants away into a concentration camp and destroyed all Ottoman master works. They wanted to blow up the mosque – the minaret and the dome roof collapsed. In 1996 Počitelj was named as one of the world’s 100 most endangered cultural heritage sites by the World Monument Fund. They have started with the restoration which is still going on. Fragments of some buildings – like silent witnesses of the troubled era – are piled near the mosque. Both Blagaj and Počitelj are on the UNESCO tentative List of World Heritage Sites. Nowadays, swallows build their nests in crannies of the old buildings and village women sit in the shadow of the historic walls offering fresh fruits and nuts wrapped in neat small cornets. Žitomisliči is a small village with a Serbian Orthodox Monastery of Annunciation built in 1566, still in Ottoman times. Monks who lived here copied religious texts and took care of precious old icons until World War II. During the war, members of the Croatian ultranationalist organization Ustasha set the monastery on fire and killed more than 500 Serbians including the monks. In addition, they put their bodies in the cave Golubinka and fixed the entrance with concrete. Only in 1989 their remains could be buried properly. Well, the entire territory of Herzegovina is full of such sad stories. And do not forget the Bosnian war when Croatian forces again set the restored monastery on fire and even blew up its ruins and laid mines in the whole area. The rebuilding of the monastery started in 2002 after it had been cleared of mines. Can you imagine that even today there are still more than 100.000 mines in Bosnia and Herzegovina? There are warning boards near dangerous sites and it is strictly forbidden to go there. The project to free the country of mines should be finished in 2019. If you are interested, you can find information about the current situation here.

Driving through Herzegovina you can often see tobacco fields and vineyards. They grow tobacco for domestic consumption only. The big tobacco factory in Mostar was destroyed in the Bosnian war. It is allowed to smoke almost everywhere. As to the wine-growing, there was a big boom in Austrian-Hungarian times. Young wine growers got training in the Wine-Making School of Low Austria in Klosterneuburg and after that brought new cultivation technologies to their home country. Today, the most known wines are Blatina and Žilavka. They export them even to Brasil. You can find many vineyards especially near the town Čitluk. In 2007, they started with a new project Vinska cesta (Wine route) – more info about it here.

Related posts (including info about the accommodation in Blagaj):