Marlenka – A Sweet Temptation from Armenia Made in the Czech Republic 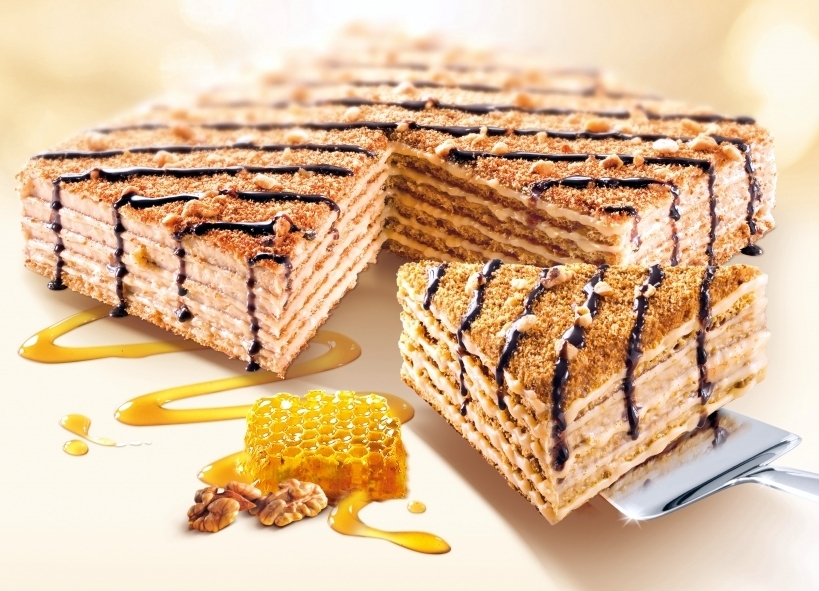 The very first coffee house in Vienna was opened by Johannes Diodato, an Armenian merchant, in 1865. Similarly, the citizens of Prague were taught to drink coffee by his compatriot Georgius Deodatus in the 17th C. It is said that he had delivered the hot drink in a cezve on his head. A picture of this man hangs on the wall in the entrance foyer of the big company which produces the sweet honey cake Marlenka.

I am sure you know the cake. It is offered in some coffee houses even in Vienna and you can also buy it – packed in nice paper boxes – in some supermarkets. But not everybody knows that this cake has its origin in Armenia. Gevorg Avetisjan had been an interior designer in Yerevan when a crises started and a war in Nagorno-Karabakh broke out. He packed his things and decided to seek his luck in Prague, the capital of the Czech Republic. But instead of that he and his family got off the train with all their suitcases on the railway station in Ostrava and then they continued to Frýdek-Místek, a city in the Moravian-Silesian Region of the Czech Republic. Here, he started some businesses but without success.

One day, sitting on a bank in a park and thinking about his return to his homeland, he noticed a warped cross on the church nearby. He decided he would repair the cross if also God helped him. And indeed, the bar where he worked was going well suddenly. Gevorg Avetisjan kept his promise. The cross on the church of St Judoc was repaired.

Later on, Gevorg‘s sister Hasmik also arrived in Moravia but could not find a job for a while. Her brother remembered a cake which they used to bake in their family. Hasmik baked several cakes and Gevorg started to offer them in some local coffee houses. It was hard but the siblings did not give up. And then one day, they received an order for 100 cakes! This was the day when the victorious campaign of the honey cake started. The go-ahead Armenian called the cake after his mother and daughter whose picture you can see on the box. The success of the cake was not only due to the taste and original old recipe but also the natural ingredients of high quality and a long shelf life. By the way, they use 7 tons of honey every month! Where has the time gone when they had baked only a few cakes per day! Today, there is a special fully automatic production line designed in the Netherlands, which is the only one in the world and which produces 1,000 Marlenka cakes per hour!!! The modern production hall was expanded with a new 2-story-building in 2014, the total built-up area is 8,000 m². In addition, there is also a new visitors center. We could watch the production on that automatic line through a glass balcony. It looked like in a lab, all staff wore white working clothes like physicians and also plastic light blue caps on their heads. What a pity, it was forbidden to take pictures! Maybe they were afraid we could reveal the secret of the recipe of their famous cake. Well, you have to go and see it with your own eyes. More information here.

Of course, there is also a tasting during the tour. They offered not only the famous cake with 5 layers of honey-nuts dough and honey-milky cream but also other sweet temptations: honey and cocoa nuggets, pachlava (Armenian baklava – sweet pastry made of layers of filo filled with chopped nuts and sweetened with honey) and napoleonky (a fluffy, crispy dessert with a delicious cream). And because a coffee belongs to desserts and maybe because the owner was inspired by his compatriots, Gevorg Avetisjan decided to build his own net of coffee houses where his cake and also Marlenka coffee are served (we tasted the coffee and I have to confess that I did not like it, after all those sweet things I found it too acid). Anyway, it is incredible that the company conquered the world with only one product! They export the cake to 40 countries! At last, I understood what it means when once somebody told me that if an Armenian opens a shop somewhere, the other shopkeepers can close their business…

The walls of the visitors center in the Marlenka company are full with pictures of Mr Gevorg with his cake and the most well-known Czech celebrities, politicians, presidents and other personalities. Our thanks to CzechTourism for organizing this visit.