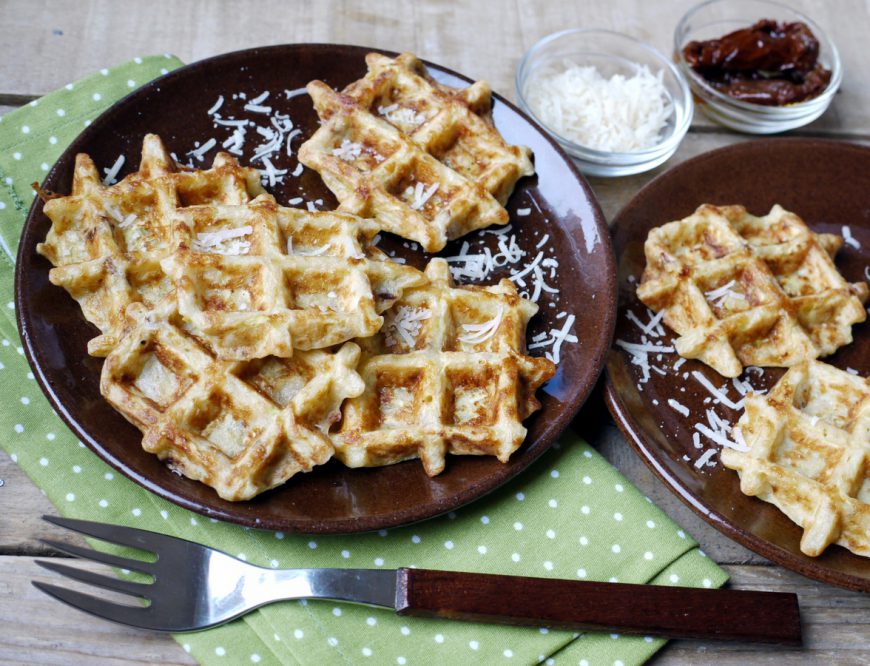 Waffles have their origin in France and Belgium but they have a very special place in the Norwegian cuisine as well. Usually, they are not eaten as a dessert but as a meal itself, people take them for a picnic and serve them also with coffee.

If you visit Oslo you should definitely find the address Torggata 7 (since Mai 2019, the new address is: Olaf Ryes plass 3 !!!) which is close to the Cathedral. It is a quite small stall which can be easily overlooked among the array of other fancy shops, cafes and restaurants. This may be the reason why the tables in front of it are painted in bright orange. The shop is called Haralds Vaffel and it is said that the waffles here are the best ones in the city, waffles No. 1. If you want to taste something traditional, you should order a waffle with jam and typical local brown cheese which is called brunost. It really does look like this: It is a tan-coloured cheese with a distinctive caramel flavour made out of goat’s milk. Mostly, it is served with a cheese slicer which is an essential part of every Norwegian kitchen. Norwegians eat it not only with waffles but also with bread. It is said that you either love it or hate it. I have to say that I liked it, even on waffles. Thanks to the sweetness of the jam I could better distinguish its cheeselike taste. In the waffles’ kingdom in the Norwegian capital, you can choose both sweet and salted ones. For Norwegians, waffles are not only food but also a symbol of hospitality and the taste of home. Maybe that’s why they are heart-shaped… Today, I chose a recipe for salty waffles from my recipes collection. Add salt to the grated zucchini and leave it for 30 minutes. After that, strain it, squeeze and dry it with a kitchen towel. Whisk the egg, milk and half of the Parmesan in a bowl. Cut the dried tomatoes into small pieces. Mix flour, salt and black pepper in another bowl, add the egg-Parmesan-mixture, dried tomatoes and zucchini to it. Grease the baking iron with oil and preheat it. Bake small waffles (1 tablespoon) for about 3 minutes to become brown. Serve warm, sprinkled with the rest of the Parmesan.

Read also the other articles about Norway:

What to Do in Oslo in Winter

Musk Oxen and Other Nordic Animals

The Church of Lom