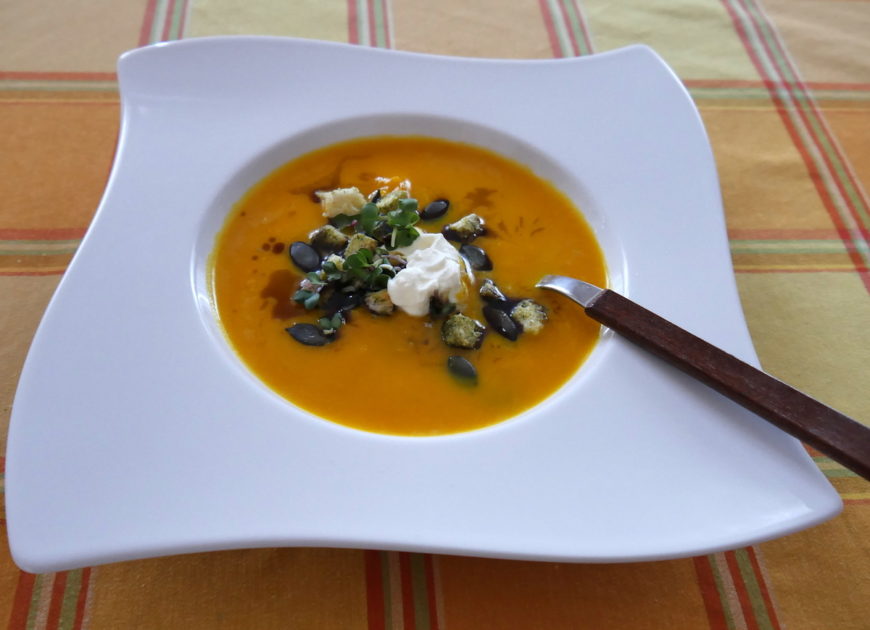 When autumn is coming to Austria, big green-orange-yellow pumpkins are ripening in many fields. I recently discovered one such field near the city of Linz. I told myself that I had to take a picture of those pumpkins, so my friend and I arrived by car the next day at the mentioned field. We were speechless. The beautiful round pumpkins we had seen a day ago were cut into pieces now and a tractor was running across the field, burying them in the earth!

However, the smashed pumpkins were without seeds! As we later learned, there are machines that smash pumpkins and at the same time collect their seeds, from which oil is then produced – thick, dark green, with a unique aroma and nutty taste. Its production is first mentioned in 1735, but at that time it was used mainly in pharmacies for making healing ointments and patches. Pumpkin seed oil is the most famous specialty of Styria, they use the variety Cucurbita pepo var. styriaca. The oil is not very cheap, but just imagine that one liter requires up to 2.5 kg of seeds, which were once collected only by hand! That’s 30-35 pumpkins! People had been aware of that already in the past, as in 1773, Maria Theresa issued an order according to which this oil was too valuable to be used in the kitchen and children were forbidden from eating pumpkin seeds. For the first time, I tasted pumpkin cream soup in Austria. In Slovakia, my home country, I only knew pumpkin sauce, especially in the school canteen… Today, this soup is one of the most popular ones in our family. I will be happy to share my recipe with you.

PS: Fortunately, we found another field for the photoshoot – the pumpkins, like huge beads drawn from a string, were waiting in long lines for their next destiny. What a pity, we couldn’t see the machine that robs them of the seeds… Maybe next time. Peel the pumpkin and onion and cut into larger cubes, garlic into smaller pieces. Heat the butter in a pot, stew the onion with garlic, add the pumpkin and simmer a little more. Then add soy sauce (not too much so that the soup does not turn brown and is not too salty). Pour hot water so that the pumpkin cubes are covered. Bring to boil, reduce the temperature and cook for 20 minutes. Mix the finished soup with a stick mixer, mix the cream according to the taste, season with Worcestershire sauce, salt and pepper. Before serving, drip pumpkin oil into the soup on a plate, garnish with a scoop of whipped cream and sprinkle with croutons and pumpkin seeds.

And what else can pumpkins be used for? You will find out in the following article. Soon! Other cream soups on the blog: