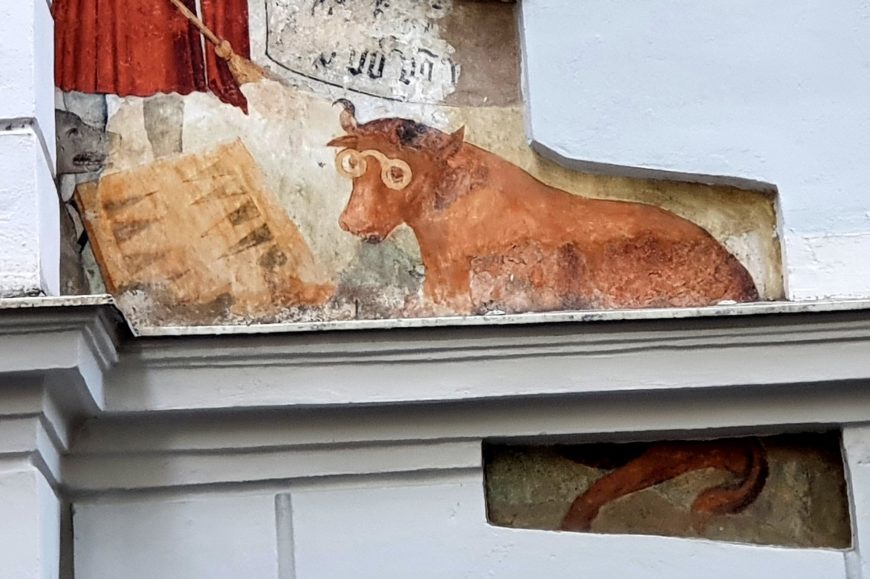 Today, we have it easy – the streets have their names, the houses their numbers. In the past, the orientation in the city used to be more complicated. Therefore, people hung a sign over the entrance or had something related to the house or its inhabitants painted on the facade. The houses then got their names from these paintings, for example in Vienna, there was the “House where a wolf preaches to geese” or “House where a rooster looks in the mirror”, “House with a big spoon of salt” and so on. One of the few paintings that have survived to this day is a scene from the story of the basilisk on house no. 7 in the Schönlaterngasse-street. You don’t know who or what is a basilisk? Then you have to read one of my first blog articles: About the Basilisk For another similar rarity, we have to go to Bäckerstrasse, a street in the 1st district of Vienna. In the 14th century, bakers (Bäcker in German) settled here, hence the name of the street. It is a pretty street with old, mostly 4-storey-high burgher houses, the core of which dates back to the Middle Ages. And next to them, there are exemplary Renaissance and Baroque buildings. Several of them have an interesting history as well, but today, we will stop only at house no. 12.

It is one of the few residential houses in Vienna where parts of early Gothic from the second half of the 13th century have been preserved. Here, it is a large stone arch above the gate, on which even the painted original number of the house has been preserved, and a small Gothic angled portal above the entrance. On the right side between the 1st and 2nd floor, you can also see part of the colourful decoration. However, the most interesting attraction is a painting, probably from the 17th century, which was discovered in 1978, when one of the apartments in this house was being renovated. According to the scene on the facade, the house is named “Wo die Kuh am Brett spielt” – “House where a cow plays a board game”.

And indeed, a cow – even with glasses – looks wisely at a backgammon board. Its opponent is a wolf. The lower part of a male figure which holds a fly swatter in his hand has also been preserved. One fly is still flying around the cow’s right eye. It is not known exactly why this decoration, but there are various legends surrounding it. In the most famous one, the central characters are the strict, not very popular city judge Hieronymus Kuh (Kuh = cow in German) and Hans Kagelwidt, a cheerful guy who liked to joke, which made him very popular with the Viennese. The two men often met in the rose garden of the luxurious house that Hieronymus had built, drank wine and played backgammon. However, it was rumoured in Vienna that Hans did not come here because of the game, but rather because of the judge’s daughter Trude. She returned his love because when he asked for her hand, Trude agreed, but at the same time set a condition that the engagement would be celebrated along with the baptism of the house. They agreed that the painting on the facade must depict a board game that connected the two men. Hans hired a painter who worked secretly, surrounded by tarpaulins, so that no one could see what he was painting on the facade. On D-Day, a crowd gathered in the street, the bride and groom came out of the house, the painter pulled a string, and suddenly the picture of a Kuh (cow) playing backgammon appeared. The whole street burst into laughter, Hieronymus and his daughter were about to take offence, but the painter allegedly pulled the string once more, the fake canvas with a cow attached to the facade disappeared and a painted game board with garlands of roses appeared. So while everything turned out well, I just do not understand how it is possible that even 400 years later we can see a cow painted on the house, but no roses… Maybe that is why there are other theories as well. For example, that it is an ironic depiction of friction between Catholics (the wise cow) and Protestants (the cunning wolf). And what about those chaotically flying flies? These should represent the helpless clergy…