A piece of the Orient – Interesting Bits about Vienna 11 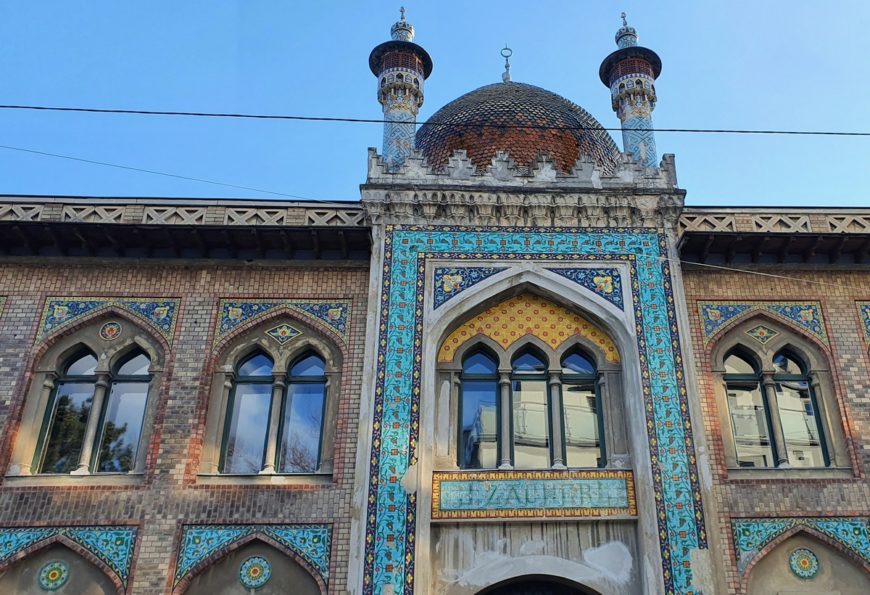 Looking at the title image, some of you may have thought that I may have made a mistake and used a photo from Iran or Uzbekistan. But it is not so. The photo truly comes from Vienna and shows an old historic factory. And now try to guess what had been produced in this factory: The unusual building is located in the classy 19th district. On its facade above the entrance, you can see the inscription J. ZACHERL – this is the name of the clever Viennese businessman (born in 1814), the founder of a successful family business. Johann Zacherl concluded an apprenticeship as a tin caster. In 1836, he came to Vienna, from where he traveled to St. Petersburg, Moscow, Kiev, Odessa, but also to Constantinople and even to Tiflis (Tbilisi). The enterprising young man started trading in tea, rum, amber and carpets, and at the age of 28, he started his own company. During his trip to the Caucasus in 1849, he became interested in the flowers of the plant Pyrethrum (similar to daisy) which were collected by locals and used against insects. He persuaded representatives of several villages to collect flowers for him, transport them to Tiflis and ground them to a powder. The miracle preparation against moths, bugs, fleas and other harmful insects was sold under the name Zacherlin not only in Vienna but also in London, Paris, Amsterdam, Istanbul and even overseas in New York and Philadelphia. In 1873, the company with only four employees produced up to 600 tons of this natural repellent. As reported in an 1896 newspaper advertisement, Zacherlin reliably and safely killed any type of insect pests, and millions of customers sought it out. Johann Zacherl retired in 1880 and his son Johann Evangelist took over the management of the company, expanding the family business (cleaning carpets and furs and protecting them against moths), as well as the production facilities. The new building, designed by Hugo von Wiedenfeld, was completed by the Mayreder brothers in 1892-93. The tiles show typical Persian patterns but were made in Vienna’s Wienerberger brick factory. The relief patterns used are also reminiscent of sacral buildings in Iran or Central Asia. The factory looks like a mosque, dominated by two minaret-like towers and an onion-shaped dome. The building is one of the few examples of a commercially motivated Orientalist style in European architecture.

I recommend going around the building. From the sides and from the back, it resembles a typical old factory more closely. In the backyard, the former boiler room with a water tower will certainly attract attention – the remains of the additions by Johann Evangelist to the factory. The tower is also in an oriental style, originally decorated with horizontal stripes, it has typical oriental angled windows and an onion-shaped turret. After World War I, interest in the miracle powder from the Orient began to decline. The business was threatened by high export taxes as well as the boom in the chemical industry. Zacherl tried to save the business by the production of ski bindings, but the bankruptcy of the company could not be prevented by Georg, the next successor of the dynasty. In 1958, the company was deleted from the register of active companies. Since then, the pseudo-mosque factory has fallen into disrepair, only occasionally have some rooms been rented or served as a warehouse. The revival did not occur until 2006, when the current descendants renovated the building and began using it for various cultural events, most recently in 2019 for the Impulstanz dance festival. However, during my visit in February 2020, the building looked abandoned again.

How to get here: www.vor.at Interesting fact: there is another building in Vienna with the name Zacherl. It is Zacherlhaus in the 1st district, which was built as a commercial and residential building by Johann Evangelist Zacherl in 1903-05. It was the first modern building in this historical part of Vienna and was designed by the famous Slovenian architect Jože Plečnik. The facade is made of polished gray granite plates and at first glance, a large statue of the Archangel Michael by the Austrian architect Ferdinand Andri will catch your eye.